"A fraternity dedicated to eliminate all prejudices" 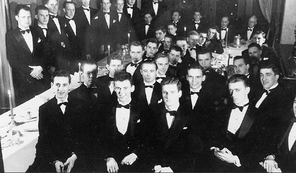 1st Anniversary Ball (1936)
Early in the year of 1935, a group of independent, aggressive college men sensed a need for a new fraternity at Drexel Institute. This need was primarily motivated by an increasing enrollment of men students, but certain fraternities added impetus to the cause. The group worked diligently toward the creation of a new fraternity. Finally, on the night of March 3, 1935, their dreams materialized - a new fraternity dedicated to eliminate all prejudices and develop character in its members was born. The organization was called the Alpha Pi Lambda.

John Linehan was elected the first president. Mr. Samuel Leonard (now deceased), of the Civil Engineering Department, consented to be the first faculty advisor of the fraternity. During the first few years, the primary aim of the organization was to gain recognition on the campus in order to insure it's permanence. Through the able leadership and the efforts of the charter member, this aim was accomplished.

The spring of 1936 found the young fraternity looking for a house. Eventually, the group secured a small house located on Baring Street. However, these facilities soon proved to be inadequate as the membership increased, and a search for a larger house begun.

With the aid of Mr. Harold Budd, who at the time accepted an advisorship, a new house, located on the corner of 34th street and Powelton Avenue, was obtained.

The fall of 1939 found still a greater increase in membership and consequently a demand for even larger facilities. It was at this time that our present home on the corner of 33rd Street and Powelton Avenue was selected.

The Castle on the Corner... 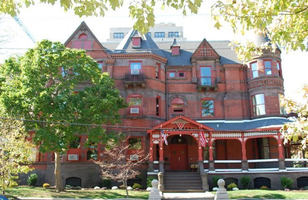 Apple Pi Fraternity House: 216 N. 33rd Street
The Alpha Pi Lambda house is a spacious mansion built by A. W. Dilks for the late William Poth in 1887. Located at 216 North 33rd street, the "Castle on the Corner" has been our home since 1939. A four story house containing 16 bedrooms, the Alpha Pi Lambda house is the largest fraternity house on campus. Powelton was one of the earliest settlements in West Philadelphia. Many of the houses were built in the 1850's in the Italian age style, including several designed by Samuel Sloan. After the Centennial Exposition, the area attracted wealthy homeowners, such as Frederick A. Poth, a brewer, for whom this house was built. Dilks had worked for the fashionable architect T.P. Chandler. This house was probably his first independent commission. The design reflects the High Victorian love of rich colors and details and the visual prominence wealthy industrialists sought for their homes. The walls have semicircular and polygonal bays and towers of red brick and brownstone trim in a variety of textures. A large porch, with delicate wood detailing sweeps dramatically across two sides of the house.

Consistent with moving into our present home, was the taking up of the residence of Mom and Pop Patton. Mom proved to be a very good cook and carried on for several years until she made official hostess and house mother. Pop was an invaluable aid in organizing our new home. Wielding hammer and saw, Pop did much to improve the appearance and atmosphere of the house, and in 1941, he paneled the pool room.

The year of 1941 saw our members leaving for the armed services. In spite of this, membership continued to grow until it reached a peak in the fall and winter of '42 and '43. With the spring of '43 came the departure in large numbers to the armed service and consequently a decline in membership. The war brought many changes to student life at Drexel. The groups which first felt the impact of the emergency were the fraternities. Alpha Pi Lambda was hit as hard as the other fraternities and for a time it seemed the house may have to close at the end of the winter term of 1943. Fortunately, some key men were able to retain, allowing the fraternity to maintain its important function on the campus.

The emergency board of Alpha Pi Lambda was organized to look after the affairs of the fraternity. As long as the active chapter functioned, the board was to serve as an advisory.
When it became apparent that the chapter could no longer function smoothly, the board was to assist in putting the affairs of the chapter in good order. Fortunately, we managed to hold our ground and remain active. After the war, many familiar faces appeared in the halls of Drexel and the ranks of Alpha Pi Lambda began to swell with the return of many old members. The years of '46, '47, and '48 saw our membership composed largely of veterans studying under the GI Bill.

In 1947, our present house was purchased by the members of the alumni. The mortgage was paid in full April 27, 1958. It was through the efforts of Bob Lorgus, then President, and other fraternity officers at that time, that our alumni corporation was formed and the house mortgage was financed.

From 1947 to the early 1950's, Alpha Pi Lambda grew in stature and prestige as an established brotherhood. The brotherhood boasted an unusual percentage of extracurricular activities of wide variety. Athletic trophies graced our mantel. Alpha Pi Lambda became the social center of the campus. The basement, the bathrooms, the basketball court, the dining room and many other parts of the physical plant were renovated, making the Alpha Pi Lambda house the pride of the Drexel Fraternities. 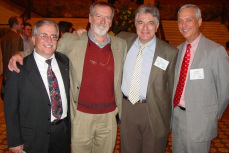 Alumni at the 70th A-Ball Celebration
After closing down in 2003, we hosted the seventieth anniversary in 2005 as an opportunity to rally alumni support and launch a large-scale fundraising campaign to resurrect the fraternity. The dreams of many became true as we initiated our first class in Spring 2006, and a year later initiating our third class in the West Parlor of Alpha Pi Lambda alongside the launch of a million dollar fundraising campaign to renovate the house into living condition. 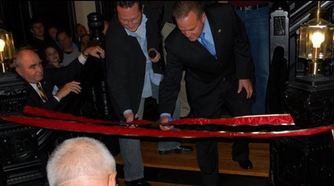 Jim Tucker and Dave K. cutting the ribbon
In 2008, dreams materialized as the fraternity reached nearly half a million dollars in its fundraising campaign. Working alongside the University, construction began on the house in Spring 2008, finishing just before Fall term began in 2008.

For the first time in nearly six years, the house was reopened and functioning as a residence to more than twenty undergrads. Mr. Jim Tucker, Senior Vice President of Student Life at Drexel University, was on-hand to cut the "ribbon" and welcome our beloved Fraternity back to our fraternity house. 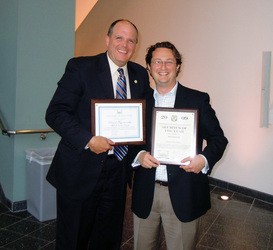 Dean Ruth celebrates with Dave Kaganovsky
In 2010, the growth and success of the fraternity was recognized shortly after celebrating their 75th Anniversary on March 12th 2010 in the Great Court at Drexel University. At the Fraternity and Sorority Life awards banquet, the fraternity was recognized for ten different awards, including IFC Leader of the Year, Athlete of the Year, Chapter Excellence, Alumni Excellence, Alumnus of the Year and Advisor of the Year (Dave Kaganovsky).

Alpha Pi Lambda has come of age. Few local fraternities have lasted more than ten years, however, the men of Alpha Pi Lambda proved they could not only perpetuate the fraternity, but continually place it in a position of leadership. In the past few years, the brothers of Alpha Pi Lambda have been working towards new goals. One is the continual restoration of our house, which has, with funding from our alumni, allowed us to install new lighting and outlets, as well as a fixed front staircase and landing as well as a renovated basement and new furniture for the house. Brothers also have been working hard, continually improving upon work in the basement, backyard and common areas.